We announced it everwhere else, but forgot our own website – PsyCard is out on iOS and Android!

It’s currently at version 1.3 on both stores, and since release we’ve added Achievements, Cloud saving and splitscreen multiplayer!

If you’re an avid follower of all things Ludosity, you may remember a game prototype vote a while back. This is the result of that vote. We looked at the result of that, and based on other factors like the downtime we had and who on the team had said downtime, we decided to make the 3rd placer (out of 11) into a full-blown game. It was PsyCard, the versus minesweeper-like! Of course, this doesn’t mean we’ll never make any of the other prototypes. They’re all still ideas from various people at Ludosity, people who would like to see these games get made some day. But for now, the convenient choice was to make PsyCard.

Before I get into the development stuff, let me explain the rules of PsyCard.

PsyCard is a two player game, played with 8×4 cards (for standard rules at least) placed face down on a table. The players take turns picking cards to flip over. The contents of the opponents cards are always hidden (unless super powers are involved).

5 of these cards are ”Fruit Cards”, 2 of them are ”Star Cards” and 3 of them are ”Skull Cards”.
Finding 3 fruits makes you win the round.
Drawing a skull makes you lose the round.
The stars add points if you win the round with them.
When a round is over, the cards are reset and a new round begins. This continues until one player reaches the score limit and wins the whole match.

The trick to the game is that when you draw an ”empty” card, you get some psychic hints about what the cards around the empty card contains. Kind of like those numbers in Minesweeper, you know. And using these hints, and your characters special powers, you must find the good cards and avoid skulls to win. 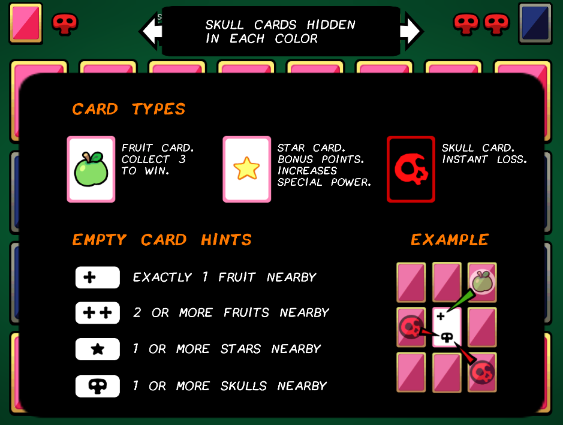 I am to blame for most of the things in PsyCard – the gameplay design, the character art, the writing (lol!), the card match programming. Basically everything except for backgrounds and music (scroll down for more on those topics). I also made the original prototype. The initial idea was to make something interesting based on the popular game Minesweeper, but with something of an ”anime” twist – super powers etc. The gameplay was pretty much set from the start, but the art had a really bumpy ride even before the prototype was started! Check this out: 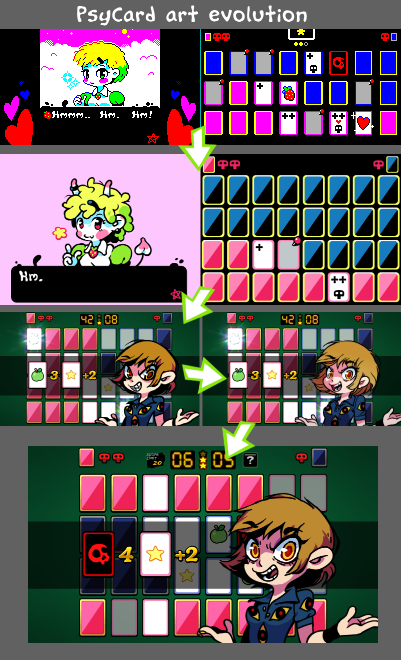 One of the things I wanted in this game was for the opponent to be more ”there” during the match than in for example our Card City Nights. So I made these kind of cut-in frames that pop in to let the opponent react to things like thinking they’ll win on their next move, or fearing the lack of safe cards to draw. I also show the full character portrait with some particles and stuff when the characters use their best special power. 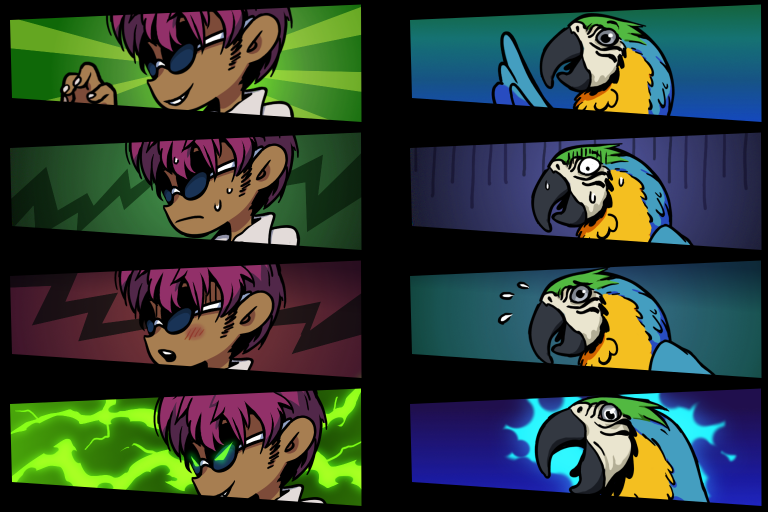 As for the story… I tried! Since our resident awesome writer/designer Daniel Remar was busy with fine tuning Ittle Dew 2 (he did draw 3 bonus characters for PsyCard though and help test the game), I wrote this game and that’s really all there is to say on the matter.

Basically it’s a dystopian cyberpunk setting, but that doesn’t seem to bother anyone in the game. It’s just the world they live in, and they want to goof around and play this popular psychic card game.
The main characters that you choose from are a bunch of freeloaders that mooch of their mutual friend who got rich from being in some kind of accident. Then they go out to play cards and meet a bunch of weirdos while doing so, the end.

Honestly, when we put up the poll for those prototypes I had already discarded PsyCard as a dead idea but threw it into the ring anyway. I expected it to place super low, but somehow it didn’t. So I reluctantly tried to rekindle my feelings for the project and get things going. In the end, I think it turned out to be a fine mobile game for picking up and playing in short bursts.

Now let’s hear from some other people who worked on the game!

When I started making the main story’s background art I only had a few character portraits to go on, it’s a nice thing to have free reins. As the main story had a setup similar to our earlier game Card City Nights with static backgrounds behind Antons character portraits, the heavily outlined cartoon style from CCN’s backgrounds felt appropriate to make a return. However, the mood of the characters where far less bright and wacky in PsyCard. This would reflect on the world as well. Not a lot of details where nailed down early on more than the idea of a darker future setting. To fit the cartoonish nature of Antons drawings, I started thinking back to the cyberpunk infused comic books I used to bury my nose in as a lad (The nerd store the characters visit in PsyCards campaign is heavily inspired by the store I read a lot of those comics in). I went heavier on the dark lines and mood, and easier on the anachronisms and wacky imagery that fills CCN. I wanted a bit of the feeling of those old comics and decided to use a limited color palette for the backgrounds. They also inspired me to segment the coloring; grouping objects together with the same color. To tie the world together, I tried to keep a theme of snow and winter in the areas. As if the city is isolated in a world of ice. 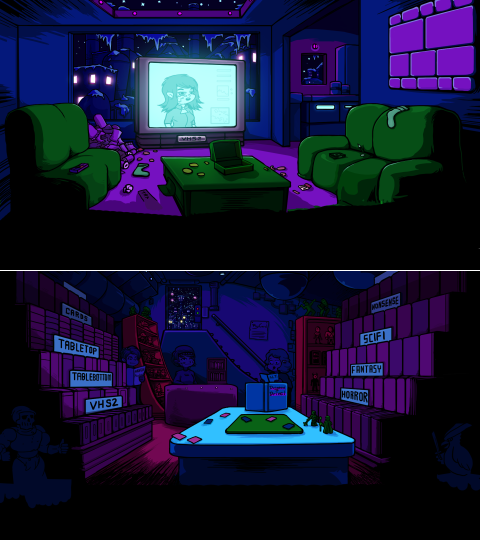 The short musical themes made for the story were heavily inspired by the random animés I just happened to be watching around the same time. Tracks like these almost overemphasizes the mood of a scene or the character it’s bound to and does so very quickly.
The music used for the battles are all dance electronica tracks with old school sounds, from basic synths to single sample instruments and breakbeats common around the 90s.
Check out some of the awesome song over att Mattias’ SoundCloud!